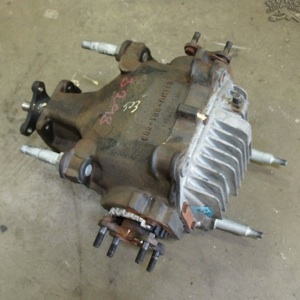 The differential in your Jaguar is very robust and long lasting. Providing that it doesn't run low on lubricant expect a life of 100,000 miles with no problem. Many owners nearly double that figure before an overhaul being needed.

To check the oil, you need to elevate the car. On the rear of the differential housing is a square headed filler plug. Removing this plug is a little tricky but a 9/16" open-end wrench can, indeed, be wriggled into place through the apertures of the rear suspension cage. Remember to wipe away the crusty road dirt before removing the plug. After the plug is out put your finger into the hole... you should feel the differential oil right at the bottom of the opening. If you don't, top off the oil until it reaches the bottom of the filler hole.

Overfilling only aerates the oil, reducing it's effectiveness.

An oil pump makes adding oil easier. Another good trick is to attach rubber hose to your plastic oil container and simply squeeze the thick liquid into the differential.

If your axle seals are leaking you'll want to check this oil level regularly - several times per year - so the unit doesn't run dangerously low on oil.

The Jaguar service manual specifies that the oil be drained and the unit refilled with fresh oil every 30,000 miles (4800KM). There is a drain plug at the bottom of the differential for this purpose. Some ownes of higher mileage cars treat the differential to more frequent oil changes.

The differential holds about 3.5 US pints (1.6L). Use premium grade EP90 gear lube. If your car has the Limited Slip Differential (LSD) buy gear oil which is labeled "for Limited Slip" use.

I believe all 12 cylinder cars had the LSD. For the USA market very few 6 cylinder cars came with the LSD although 6 cylinder models for other markets were so equipped more frequently, especially the upper-line variants.

LSD equipped cars generally had a tag on the differential to identify them. This tag is often lost so, if unsure, safely elevate both rear wheels and spin them. If the offside wheel turns in an opposite direction, you do not have the LSD. If both wheels rotate in the same direction, you have a Limited Slip Differential.

The LSD in the XJ12 S3 is really quite different as it is narrower, has the brake disks inboard and has a solid flange input to the pinion.In reality it's no different from the unit fitted way back to the XKE dating back to the late 1950s.

The working principal of the earlier salisbury is also very different to the one fitted in the XJ40 in that it has sliding cross pins at a cam angle of 45 degrees, while the later LSD merely uses the helix angle of the gears on the clutch packs to try to generate lock.

Early axles therefore tend to lose their clutch pack preload, especially when used on the 12 cylinder engines for any high mileage.

Later axles have a lower preload which can entirely vanish after a while, making it on occasions very tricky to know whether or not there is a LSD fitted or not.